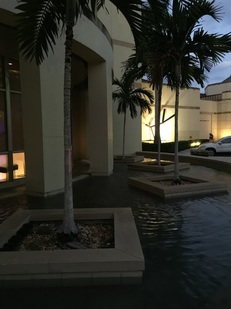 "Since its founding in 1941, The Norton Museum of Art has grown and evolved to become one of Florida's major cultural institutions. The Museum is internationally known for its distinguished permanent collection featuring American Art, Chinese Art, Contemporary Art, European Art and Photography. Its masterpieces of 19th century and 20th century painting and sculpture include works by Brancusi, Gauguin, Matisse, Miró, Monet, Picasso, Davis, Hassam, Hopper, Manship, O'Keeffe, Pollock and Sheeler. The Museum presents special exhibitions, lectures, tours and programs for adults and children throughout the year."

Every Thursday night the museum hosts "Art After Dark" from 5-9 pm, featuring special programs and music. And if you are resident of Palm Beach, don't miss the opportunity for free admission on Saturdays.
The music duo My Uncle's Friends perform at Art After Dark
March 24, 2016. Read more and listen to their music here.