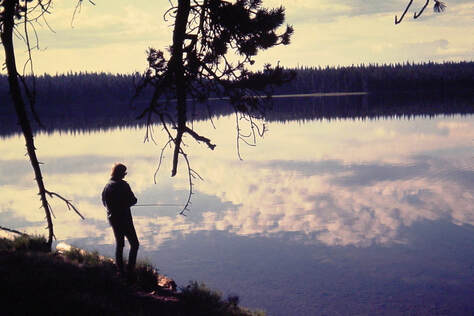 Riddle Lake is just north of Heart Lake, and it is a short hike: only 2½ miles long. The trail crosses over the Continental Divide, but it is still very flat and level. The route mainly leads through small meadows where moose, I was told, are sometimes spotted. I didn’t see any moose, but if I had been a moose, I would probably have hung out in the area. The reward at the end of the trail is a beautiful little lake with Heart Lake’s Mount Sheridan in the background.

I have been to the lake twice, planning to spend the night at the lake both times. My first trip was late one August and it was a very delightful trip. We hiked to the lake and swam in it – there is a small sandy beach in one area. We fixed dinner over the campfire, then went to sleep to the sound of coyote howls all around the area. I was surprised to find that real coyote howling, not the movie stuff, is very disorganized and sounds much like the canines are being tortured to death.

We did a little fishing in the morning before hiking out. I was so impressed, I wanted to schedule another hike to the lake as soon as I could. Circumstances intervened, however, and I actually had about a 5-year wait before I could do another trip to the lake.

My second trip to this pristine lake could not have been more different. My second trip was early one July; the trail was somewhat swampy, but walk-able. Even though we had drenched ourselves in repellent, storms of mosquitoes plagued us the entire trail. We got to the lake, set up camp and tried to fix dinner amid the clouds of mosquitoes and other biting, swarming insects.

Giving up on dinner, we retreated to our little tent, zipped it shut, and began to try to diminish the census of mosquitoes already in our tent. It wasn’t near dark yet, and we were prisoners in the tent. We looked at each other and decided this was not going well. Not at all as planned. We again slathered ourselves in bug repellent, folded up our camp, and hiked back to the trail head before dark. Ignominious defeat has a bitter flavor, but does not taste as bad as inhaled insects.

For years, I wondered how my two Riddle Lake experiences could have been so different. Then, while researching background information for this article, I found the following statement in the book, “Yellowstone Trails”, by Mark and Joy Marschall: “The marshes (around Riddle Lake) are a haven for mosquitoes which can be quite a nuisance throughout July.” Yeah, No Kidding! The moral to this story, then, is to plan any trip to Riddle Lake later in the summer – not in June or July. 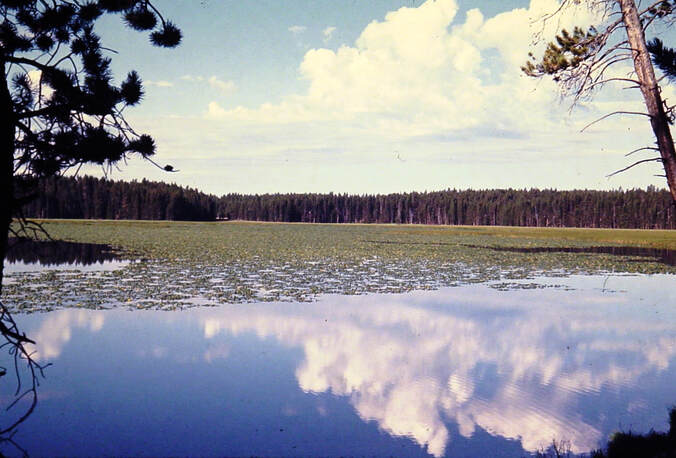