During my prime Yellowstone hiking years, in the mid 1960’s to the early 1970’s, bear bells were the device of choice to let the bears know you were coming.  I have resorted to other methods, such as beer cans with rocks inside (shake violently while walking), and even carrying a small boom box playing some good old hard rock.  Some hikers have preferred a loud, talkative hiking partner.  This approach can have a negative aspect:  When you get to your destination,  you may long for a roll of duct tape to silence the nonstop chatter.

In what now seems like incredible naiveté, bears in the back country were once considered to be relatively harmless, even entertaining clowns of nature.  All that attitude was radically changed in one tragic night in Glacier in 1967 when two nineteen-year-old women were killed by grizzlies in two separate incidents.  The incidents happened 10 miles apart, and two different bears were involved.  These bears had become conditioned to see humans as a food source to encounter, rather than a natural enemy to avoid.  The Night of the Grizzlies, as it is now called, began major changes in bear management in the national parks.  Dumps were closed, all garbage was incinerated, and bears who had become accustomed to encountering humans were relocated or killed. 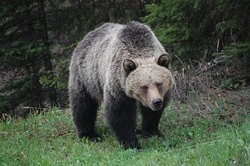 Technology has brought about a new improvement in bear encounter avoidance: Bear spray.  This innovation might be best described as turbo-Mace and shows promise in further conditioning bears to avoid human encounters.  In Glacier, we were warned by one guide to refrain from spraying bears unless they actually seemed intent on threatening us.   Some hikers had panic-sprayed bears who were not showing  any sort of aggressive intent.  According to our guide, one dose of the bear spray will ruin a bear’s sense of smell for many days after a spraying.  This makes feeding difficult, if not impossible.  However, the end result of years of hikers using bear spray might be that bears will avoid us, the way we would avoid a skunk.

When bears do charge a person, it’s not like you usually see in the movies.  Bears charge on all fours, not on their hind legs.  Bears are on their hind legs in movies to make the scene more frightening, and movie bears (when not a completely digital effect) are trained to stand on their hind legs and roar convincingly.  Bears have excellent senses of smell and hearing, but their eyesight is not their sharpest sense.  When a bear stands up on hind legs, he’s either trying to reach something, or curious and trying to get a better look.

Adult bears usually avoid humans if they know humans are near.  Bear cubs may not have learned this lesson, and this is the main reason sometimes humans end up between a mother bear and her cubs.  If the mother bear does not sense the human hiker soon enough, she may detect them when the hiker is already between her and her cubs.  Typically, this is when disaster happens.

If disaster does happen, the advice is pretty universal:  DO NOT RUN from the bear.  This will trigger a natural “chase prey” instinct.  Use the bear spray if you have it.  If you don’t, the best advice is to play dead.

In summary, caution and preparation are the best techniques to manage hiking in bear country.  It does remind me of a situation when my wife and I were hiking with another couple near Bear Lake in Rocky Mountain National Park in Colorado.  Every time we heard a noise in the brush near the trail, one of our hiking partners would ask frantically, “IS IT A BEAR??”.  I finally replied, “Pam, bears are large, but they are incredibly quiet.  As a matter of fact, if you DON’T hear it, then it’s probably a bear.”  Her eyes popped wide open, then she remembered who she was talking to, the eyes narrowed, and she said “You . . you . . “  Well, best leave that unfinished.  ​ 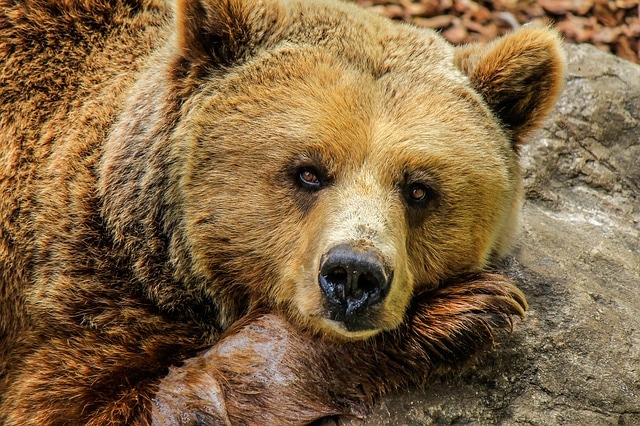