The Cunard Building in Liverpool 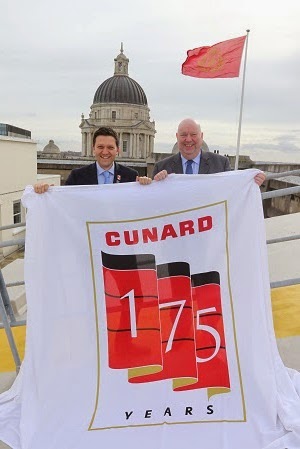 Cunard Director Angus Struthers, left, and Liverpool Mayor Joe Anderson (Credit: Cunard)
Here is another chapter in the history of Cunard, which celebrated its 175th year in 2015.

"Liverpool Mayor Joe Anderson and Cunard Director Angus Struthers hoisted a specially-commissioned 175 Flag above the Cunard Building at the Pier Head in Liverpool on Feb. 20.

"Cunard celebrates the 175th anniversary of the departure from Liverpool of its first ship in 2015 and the Cunard Building, its former Headquarters from 1916 to 1967, will play a key role in the celebrations planned to mark this milestone anniversary. The Building, one of the famous “Three Graces” on the Pier Head waterfront, a UNESCO World Heritage site, will mark its own 100th anniversary in June 2016.

“The Cunard Building was designed to convey gravitas as a land-based representation of the Cunard ships themselves: solid, reliable, elegant and impressive. For almost 100 years the Building has remained just that and although Cunard moved to another home in 1967, the Building has remained a true statement to the shared history of the company and Liverpool. It is therefore very fitting that the Three Queens of the Cunard fleet will salute the Cunard Building when they gather on the Mersey on 25 May 2015.”

"The Cunard Building, now one of the “Three Graces” on Liverpool’s magnificent World Heritage Site Pierhead, was built on the site of George’s Dock. Divided into three sites by the extension of Water Street and Brunswick Street, it was destined to become one of the most famous waterfronts in the world.

"The Cunard Building was the third to be built – the Mersey Docks and Harbour Board being the first - and it was a construction on a massive scale, a shoreside version of Cunard’s floating palaces at sea. Built of 180,000 cu feet of Portland Stone, with 50,000 cu feet of Italian marble inside, the building’s design was based on the Farnese Palace in Rome – the family home of Pope Paul III. Only much, much bigger! The third building to be built was the Liver Building. The Cunard Building is in the centre

"The old dock walls were re-enforced with 700,000 cu feet of concrete to prevent the Mersey from seeping in, and the floor of the original dock became the floor of the lower level of two basements. Built on a huge scale – the 11 floors could accommodate 250,000 people standing – the building’s huge public rooms, corridors and stairways were lavishly decorated with marble columns and arches. It was clearly the headquarters of a company that mattered. 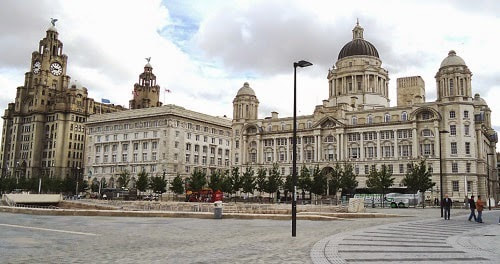 "On the ground floor was the enormous and magnificent pillared ticket hall and lounge for First Class passengers. Second and third class passengers were dealt with in the first basement – including, for emigrants, compulsory medical examinations.

"Shields on the riverside elevation acknowledge the period when the building was constructed, being the arms of countries allied in the Great War – Britain, France, Russia, Italy, Japan, Belgium, Serbia and Montenegro. At each corner is the shield of the Cunard company, supported by an eagle – each weighing 43 tons. And above each third floor window are the arms of the principal passenger ports in the United Kingdom – Liverpool, Bristol, Southampton, Plymouth, Falmouth, Hull, Portsmouth, Newcastle, Glasgow, Leith, Aberdeen, Dundee and Queenstown.

"Cunard moved into its prestigious new building, its third and last in Liverpool, in June 1916 and it remained there for over fifty years.

"While the Cunard Building was perfect in every way, not just for the reassurance it gave to passengers with its air of permanence, stability and grandeur, and not just from the efficiency of having the staff on one site, but because the directors could look out from the Boardroom window and see the divisions of their empire – the ships – coming and going from the Mersey, the centre of Cunard operations.

"But a significant change took place in 1936. Queen Mary, despite having Liverpool imprinted on the stern like the rest of the Cunard fleet, was too big to enter the Mersey – and she never even visited the port. She was based in Southampton, where some Cunard operations had begun a few years earlier, and was followed later by the even bigger Queen Elizabeth. No longer could the directors view the pride of the fleet from the Boardroom – the major shift had begun.

"By 1967, the focus of Cunard activity had shifted away from Liverpool; it remained Cunard’s administrative center, but everything administered was elsewhere.

"However, the histories of Liverpool and Cunard are interwoven and the emotional connection between the city and the company remains as strong as ever today."