Travel by Air and Sea 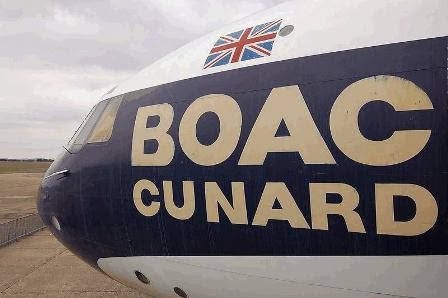 Credit: Cunard
Here is another chapter in the history of Cunard, which celebrated its 175th year in 2015.

In 1957, airplanes carried more passengers across the Atlantic than passenger liners; and the number taking to the air rather than taking a ship would increase yearly thereafter.

Cunard Line saw its future as a transatlantic carrier threatened in the early 1960s with the advent of cheap air travel. In fact, Cunard was one of the first companies to take advantage of air travel to deliver its passengers to its ships in the Mediterranean, Bermuda and the Caribbean, and decades later millions of cruise passengers would be flying to and from their ships.

Without doubt, the most spectacular air/sea marriage occurred when British Airways and Cunard Line joined forces to create the Concorde/QE2 package, matching the world’s fastest passenger aircraft with the world’s fastest and most famous ocean liner. 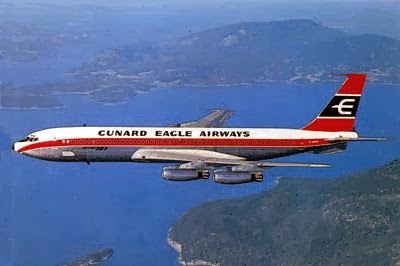 In March 1960, not wanting to miss out on the new boom in air travel and with passenger numbers on its ships dwindling, the Cunard Steamship Company bought a 60% shareholding in Eagle Airways Ltd for $49 million. Cunard Eagle Airways was created and the support its new shareholder brought enabled the airline to become the first British independent carrier to operate pure jet airliners as a result of a $9.8 million order for two new Boeing 707-420 planes powered by Rolls-Royce Conway engines. The airline had placed this order (including an option on a third aircraft) in expectation of being granted traffic rights for transatlantic scheduled services. Cunard's acquisition of a controlling stake in Eagle resulted in the founder of Eagle Airways, Harold Bamberg, being appointed Aviation Director, and Cunard hoped that his knowledge of the industry would help them to capture a significant share of the one million people that crossed the Atlantic by air in 1960.

In April 1960, the Government approved a range of new “Colonial Coach” fares for travel by British residents only on cabotage routes linking the UK with its remaining colonies. Despite opposition from IATA, UK airlines, including British IATA members, were free to introduce them from Oct. 1, 1960 as UK authorities controlled fares at both ends. Apart from Eagle, the beneficiaries included BEA (British European Airways), BOAC (British Overseas Airways Corporation), BUA (British United Airways) and Skyways.

From Oct. 1, 1960, all-coach DC-6Cs plying the London-Bermuda-Nassau route were replaced with Britannias featuring a 98-seat, three-class layout comprising 14 first-class, 66 economy and 18 Skycoach seats (British residents only). Like its predecessors, these were Bermudan-registered. An additional weekly all-Skycoach operation using a 113-seat Britannia 310 commenced on 10 October 1960. All revenues – including those from first-class passengers – were shared with BOAC. Schedules were complemented by additional Britannia and DC-6 charters during the peak summer season.

In June 1961, Cunard Eagle became the first independent airline in the UK to be awarded a license by the newly constituted Air Transport Licensing Board (ATLB) to operate a scheduled service on the prime Heathrow-New York JFK route, using Boeing 707 jets and Bristol Britannia turboprops at a frequency of one round-trip per day. The license was valid for 15 years – from Aug. 31, 1961 to July 31, 1976.

The airline also won the right to serve Manchester, Glasgow Prestwick, Philadelphia, Baltimore, Boston and Washington. The carriage of passengers on UK domestic sectors and of mail on all sectors was denied. Similarly, requests for traffic rights to Toronto, Montreal, Detroit and Chicago were turned down. This decision angered BOAC, which was losing money at the time. It appealed to Aviation Minister Peter Thorneycroft, who was empowered to accept or reject the ATLB's recommendations and to uphold or quash appeals against its decisions. The state airline cited its order for 45 Standard and Super VC10 long-haul jets and an earlier ministerial promise not to permit another British competitor on this route in support of its appeal. The appeal was upheld, resulting in revocation of Cunard Eagle's licence in November 1961.

On May 5, 1962, the airline's first 707 inaugurated scheduled jet services from London Heathrow to Bermuda and Nassau. The new jet service – marketed as the Cunarder Jet in the UK and as the Londoner in the western hemisphere – replaced the earlier Britannia operation on this route. Cunard Eagle succeeded in extending this service to Miami despite the loss of its original transatlantic scheduled license and BOAC's claim that there was insufficient traffic to warrant a direct service from the UK. A load factor of 56% was achieved at the outset. Inauguration of the first British through-plane service between London and Miami also helped Cunard Eagle increase utilization of its 707s.
​ 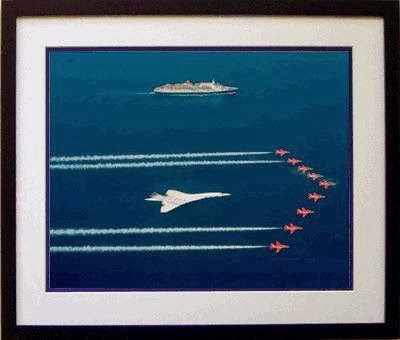 1985 also saw what was heralded as the “photograph
of the century” when nine Red Arrows and a Concorde
flew over QE2 in the English Channel on May 18, 1985. (Cunard)
BOAC – Cunard

Although Harold Bamberg was appointed to the board of BOAC-Cunard, he became disenchanted with Cunard's corporate culture. He resigned from BOAC-Cunard's board in 1963 while continuing as Managing Director of Cunard Eagle Airways. His growing disenchantment with BOAC-Cunard's culture resulted in the decision to reconstitute Eagle by buying back control from Cunard.

Subsequently, the BOAC-Cunard operation was dissolved in 1966.

At one point Cunard seriously considered leaving the shipping business and going solely into the airline business.

All of this involvement with the air business was to have a great effect on Cunard and QE2: It brought Sir Basil Smallpeice into Cunard (the Chairman of Cunard from November 1965 and the ultimate ‘savior’ of the company), and the money raised by Cunard when selling their stake went toward propping up the business and contributing to the construction costs of QE2.

And if Cunard had continued in the air business, perhaps British Airways would not have existed!

Sensibly, Cunard combined cruises with flights to and from whichever ship from the mid-1960s and offered air one way/sea the other packages ever since QE2 entered service. Thus Cunard, which had seen its future as a transatlantic carrier threatened in the early sixties by the advent of cheap aircraft travel, turned adversity to its advantage.

The first time Cunard linked QE2 and Concorde was in March 1977 when a special package was put together with the cost of $1,812 per person. This involved leaving on Concorde from London to Washington on March 30, 1977; four nights in the Watergate Hotel in Washington; train to New York; three nights in the St Regis Hotel in New York and then QE2 back to Southampton (6 – 12 April). It isn’t clear whether this was a charter of Concorde by Cunard.

On Aug. 6, 1978, after a special radio license had been purchased from the General Post Office by Cunard, saw the first-ever radio link-up between QE2 and Concorde. At 1130 hours GMT, when both ship and aircraft were traveling westbound between Britain and New York (QE2 was two days out from Southampton and Concorde and hour out of Heathrow), the two craft came close enough for workable radio contact. At the height of 57,000 feet and a speed of 1,250 mph, Concorde was within a 250-mile radius of QE2, steaming at 30 knots. Concorde’s pilot, Captain Derek Ellis, called up Captain Lawrence Portet with the call sign Speedboat Concorde, and they exchanged greetings and talked for about two to three minutes before they both continued on their respective journeys. QE2 passengers were able to listen to this historic link-up as it was relayed through the vessel’s public address system.

The year 1983 was when Cunard chartered Concorde for the first time as part of a QE2 Concorde package. Cunard began chartering a British Airways Concorde on a regular basis for the next 20 years. Various air-sea-hotel packages spread out the flight demand, as a single Concorde flight carried just 100 passengers, while one QE2 sailing could take up to 18 times that number. When the Cunard-chartered Concorde filled up, overflow passengers were booked on regularly scheduled BA supersonic flights between Washington, New York and London, and also on the Air France Concorde to and from Paris.

Concorde and QE2 became two rivals in a partnership of equals that should not have worked but became one of the most successful travel combinations ever, with Cunard buying more Concorde seats at one time than any other!

By 1985, Cunard was by far the world’s principal user of Concorde, after British Airways and Air France, and accounted for 75% of Concorde’s charter business – that year’s Concorde program being worth $19.6 million and involving 14,000 seats. Cunard’s ever-increasing financial commitment to Concorde was greater in 1985 than Concorde’s profit was for the last financial year. A total of 130 transatlantic flights were timetabled to tie in with QE2’s 26 Crossings and her New York cruise departures.

1985 also saw what was heralded as the “photograph of the century” when nine Red Arrows and a Concorde flew over QE2 in the English Channel on May 18, 1985.

The announcement from British Airways in April 2003, concerning the retirement of Concorde in October that year, would mean that there would only be 12 further opportunities left to combine the two great icons of contemporary travel: QE2 and Concorde.

Sadly, the final farewell came on Oct. 24, 2003 when Concorde passed over QE2 on the Atlantic for the last time. QE2’s Master, Captain Ray Heath, sent the following message to the Captain of Concorde:

“From one British icon to another: QE2 and Concorde have been an improbable, unique and successful transatlantic partnership for the past 20 years. We are sorry to see you go”.

After 20 years one of the most successful partnerships in travel was over.

--Walking along QE2’s Boat Deck on either the first afternoon after leaving New York or the last afternoon before arriving, a sharp boom-boom like a gunshot could sometimes be heard. That would be Concorde hitting Mach 2 at 61,000 feet on her way from New York to London. By the time passengers had looked up (seeing nothing), Concorde was already 23 miles away.

--When QE2 took the Great Circle Route between Bishop’s Rock off Cornwall and Cape Race, Newfoundland, the Concorde’s sonic boom, following a path 32 miles wide, could be heard over a period of three days – 28 minutes earlier each day when the ship was sailing westbound and the Concorde was flying east. To actually see the Concorde flying overhead, passengers would have needed a warning (available when a former Concorde pilot was sailing as a guest lecturer), the direction in which the aircraft was flying and, of course, a cloudless sky.

--During QE2 Crossings, one of the daytime speakers may have been a former British Airways Concorde Captain, and these would continue to travel to talk about Concorde until QE2’s retirement and on Queen Mary 2, which entered service after Concorde’s retirement.

--One of the prints commissioned for Cunard’s 150th Anniversary was of QE2 in New York with Concorde flying above.

--On the final (from Southampton) or first day (from New York) Transatlantic Crossing of QE2, what sounded like a shotgun going off could be heard – it was Concorde going into Mach 2.

--Concorde broke the record on Cunard charters to Cape Town, Hong Kong and Sydney. On the latter, Concorde arrived on 14 February 1985 and Cunard had two ships in Sydney: QE2 and Sagafjord.