The Legend of the Pretty Sisters 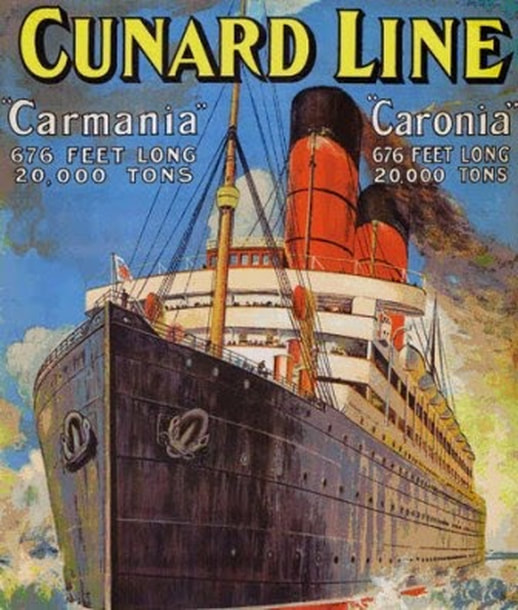 Credit: Cunard
Here is another chapter in the history of Cunard, which celebrated its 175th year in 2015.

As the 20th Century dawned, Cunard Line began to draw up initial plans for what would become the first-ever “superliners,” Lusitania and Mauretania, which would enter service in 1907. But how would the future superliners, the largest and fastest ships in the world, be powered?

There were two options for Cunard to consider: the standard quadruple-expansion system or the new-fangled Parsons steam turbine system. Engineer Charles Parsons had caused controversy at the 1897 Spithead Naval Review by demonstrating his revolutionary turbine-powered Turbinia.

At the same time, Cunard's German rivals were eclipsing its fleet so, in a bid to reclaim its tarnished pride, Cunard convinced the British Government to provide a generous loan package to rebuild its fleet in return for the ships being made available to the government in time of war. This is how Cunard would finance all of its major new builds right up to QE2, and every loan was repaid.

With financing in place, Cunard was able to embark on an ambitious shipbuilding programme that would result in Lusitania and Mauretania. But first would come the twins, Caronia and Carmania, and it was those two ships that would resolve Cunard's superliner powerplant quandary, as they would be used as floating test beds. To ensure all things would be equal, both ships would be built at the same shipyard, John Brown & Co. in Clydebank, but Caronia received the standard quadruple-expansion system while Carmania got the Parsons steam turbine system. The performance of each ship would be carefully studied and evaluated and the most efficient plant would be put into the future superliners.

When they entered service in February 1905 (Caronia) and December 1905 (Carmania), they were the largest Cunard ships ever built and the first Cunard ships to be fitted with bridge controlled watertight doors. They quickly became known as the “Pretty Sisters” and it was Carmania's steam turbine engines (which achieved 20.04 knots compared to 19.62 knots on Caronia) that proved to be faster and more economical. Steam turbines would be used on every important ship right up to QE2 in the 1960s!

So two ships that were built to experiment with and solve an important issue would have a major influence on future Cunarders, and each “Pretty Sister” would also enjoy successful careers.

Caronia was employed on the Liverpool to New York via Queenstown service and was sent cruising in the Mediterranean in the winter months. In the First World War, she became a troopship before returning to normal service in 1918. Subsequent years would see her on various routes across the Atlantic: from Hamburg and Southampton to New York; Liverpool to Quebec and Montreal; Liverpool to Boston and New York; and finally London to Southampton to New York, with winter cruising from New York to Cuba. Caronia was eventually laid up in 1931 and sold in 1932 for £20,000 to UK shipbreakers, who sold her on for £39,000 to Japanese shipbreakers. She sailed to Japan with the name Taiseiyo Maru, “The Great Oceanship”.

Carmania operated on the same route as her sister. She was requisitioned as an armed merchant cruiser and on 15 August 1914 – just days after the declaration of war – she met and engaged in battle the German Hamburg South America Line's Cap Trafalgar, which was similarly armed, off the Brazilian island of Trinidad in the South Atlantic. Amazingly, Cap Trafalgar's exterior had been altered, with the removal of her third funnel and the repainting in Cunard colours of her remaining two funnels, for her to resemble Carmania! After opening fire simultaneously at a range of around three miles, the two ships closed to within 1,700 yards. During the two-hour engagement, Carmania received over 79 hits and was ablaze from bridge to stern. Cap Trafalgar had been hit near the waterline and, after listing, sank. The German raider Kronprinz Wilhelm was approaching to come to the aid of her consort, but Carmania made her escape. The battle was the only time an armed merchant cruiser ever sank a similarly outfitted merchant vessel.

Carmania was decommissioned in 1916 and after the war continued to sail the Atlantic like her sister before being broken up in Blyth in 1932.