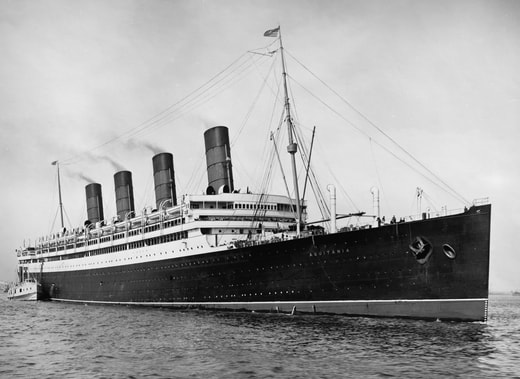 By Detroit Publishing Co. [Public domain], via Wikimedia Commons
Here is another chapter in the history of Cunard, which celebrated its 175th year in 2015.

In 1915 the British Government War Office requested that Mauretania and Aquitania be made available to transport three divisions of troops to the Mediterranean where the Allied armies were heavily involved in the ill-fated Gallipoli expedition.

Painted black (including her funnels) Aquitania left Liverpool on 18 May 1915 for Mudros with over 5,000 troops of the 13th Division. She left Liverpool again on 3 July, again with over 5,000 troops, including much of the 11th (Northern Division) and two days out Aquitania was fired upon by a submarine, possibly Austrian, but fortunately the torpedo missed by some fifty feet astern. Aquitania reached Mudros on 10 July. During the next three months she made a number of trooping voyages between Liverpool and Mudros and conveyed around 30,000 troops. The troops delighted in the “ample accommodations” found on Aquitania and recalled adequate breakfasts of porridge, eggs and bacon and a whole pint of coffee as well as sports and parades on deck being the order of the day.

In late August 1915, with casualties from the Gallipoli Campaign mounting, the Government announced that "owing to the increased requirements for hospital ships in connection with the Dardanelles operations it has been decided to fit the Aquitania as a hospital ship".

The work was carried out in Southampton and the cost of the conversion and equipping her for hospital duties was £63,000. The Carolean Smoking Room was converted into a large ward, as where several other public rooms. The liner became HMHS (His Majesty's Hospital Ship) Aquitania and was repainted in the internationally-accepted hospital ship colour scheme of buff funnels, with a white hull, a broad green band and red crosses. On 4 September 1915 she set sail for Mudros where casualties were transferred from smaller vessels. Many of those casualties would have sailed to war on Aquitania.

By February 1916 it was decided to lay-up Aquitania as by then the final evacuation of Allied troops in January that year had reduced the requirement for hospital ships. Aquitania would retain her hospital fittings in case - a sensible move as when White Star's Britannic (sister to Titanic) was mined and sank off Mudros on 21 November 1916, Aquitania was ordered to the Mediterranean to replace her. She left Southampton empty on 7 December and returned in January where she was laid up again.

Aquitania's hospital ship days were over and she would embark on troop carrying duties across the Atlantic once the Americans had entered the war.