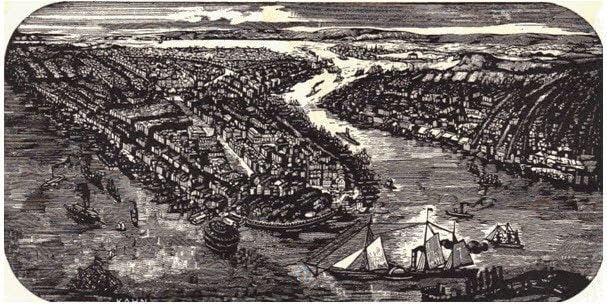 Hibernia arrives in New York (Cunard)
Here is another chapter in the history of Cunard, which celebrated its 175th year in 2015.

On 29 December 1847, Cunard Line made its first call to New York when Hibernia arrived. The Herald newspaper's front page screamed “Hail to the Hibernia” and detailed how "the entire populace swarmed to its waterfront to cheer the coming of the first Cunarder to the harbour of New York.”

Citing the wonders Cunard had done to Boston in terms of commerce and population growth, The Herald claimed Cunard's first ship, Britannia, had "initiated a new era in human intercourse."

The newspaper went on: "The arrival of the Hibernia...is only the beginning of the revolution that is going on in ocean steam navigation, which will ultimately result in drawing all steamers to this port. Our merchants ought to welcome Captain Ryrie to New York. Why not give him a public dinner, Friday next?"

And what a dinner Manhattan gave to the good Captain Ryrie! Toastmaster Depeyster Ogden proclaimed, "In the name of the city and of the merchants, we welcome you to the city of New York, Captain Ryrie. The establishment of this new Cunard Line is the commencement of a new era in steam navigation. The Cunard steamships have been attended with undreamed-of success... the skill and science displayed in their navigation is deserving of praise, and reflects the greatest credit on all concerned."

New York quickly replaced Boston as the American terminus for Cunard's services. And what a relationship Cunard and New York have had since. The maiden arrivals of the line’s greatest ships were welcomed like no other.

The advert warning passengers not to travel on an Atlantic voyage appeared in New York papers on 1 May 1915 the day Lusitania sailed - six days later she was torpedoed.

The arrival of Queen Elizabeth after her secret dash across the Atlantic in 1940 remains perhaps the strangest arrival of all.

The sight of Queen Mary and Queen Elizabeth, in their wartime livery, together with the French liner Normandie, is one of the most memorable maritime images (below) captured in the city. Plus spot the second Mauretania:

The Cunard Building at 25 Broadway was built to match the splendour of the Cunard Building in Liverpool. Two bookends on the Atlantic, Cunard's ocean. The building was opened in 1921 and Cunard was based there until moving to 555 Fifth Avenue in 1968.

While Cunard itself relocated to Miami in 1996 its ships have remained and will always be “Englishmen in New York” or “native New Yorkers” depending on which song you prefer! 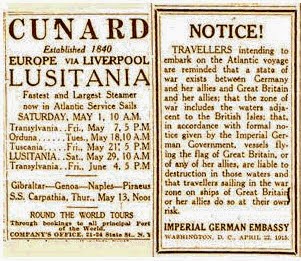 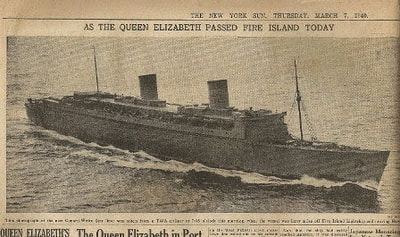 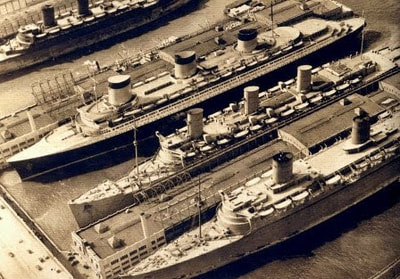