A cruise on scarlet lady 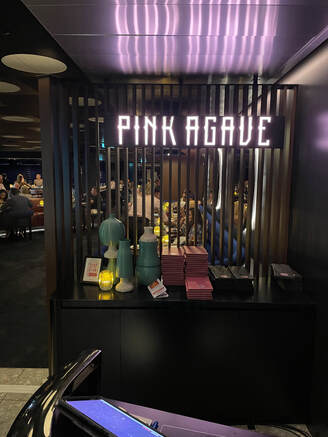 Pink Agave is the ship's
upscale Mexican-theme restaurant
We did find the embarkation process a little cumbersome. "Sailors" are assigned a time to board and lined up according to those times. Even though our cruise was around 50 percent capacity (nearly 1,500), it took a while to get boarded. It didn't help that all the time we spent loading our info to their app somehow wasn't recognized when we got there. Technology -- it's great when it works.

Speaking of which: Instead of a room card, you are given a small device on a rope which you are instructed to hook around your wrist. It opens your door and gets you on and off the ship. We found it awkward to attach -- especially if you have a small wrist like Pam --  but that may be just us.

Once onboard, you almost immediately feel a new vibe taking over: Chill. The mood is laidback, in a casually upscale setting. On Scarlet Lady, you won't find big public spaces, like multi-story atriums and large theaters hosting Broadway shows. Instead, it's filled with beautifully appointed, initimate settings conducive to adult conversation, relaxing or enjoying a drink.

Special emphasis on "adult." The main factor that separates Virgin from other cruise lines is you have to be at least 18 to sail, which many guests told us was the reason they chose Virgin.
​
Another difference -- there are no specialty restaurants. All the venues onboard are included in the fare, as is basic WiFi, water and sodas and gratuities. We found the food overall to be above average, with something for every taste. In particular, we liked Pink Agave (Mexican), Razzle Dazzle (American), Extra Virgin (Italian) and The Wake (steak and seafood).

On Deck 15 you'll find The Galley, a food court where we frequented for breakfast and lunch. Instead of buffets, you sit down and order from a menu. Service here, and ship-wide, was exceptional. There is one sit-down restaurant in this area: Gunbae, a Korean BBQ experience where guests sit around a flameless grill and sample various Asian specialties. It's meant to be fun and interactive, and starts with a drinking game. Be prepared -- it gets loud. 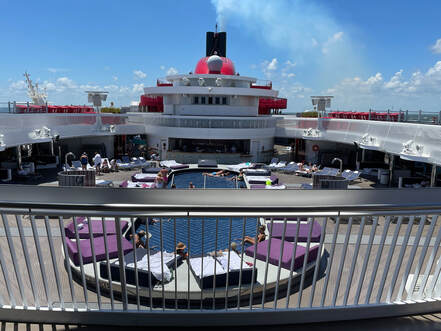 The pool features lots of places to lounge
One difference from other cruise restaurants -- the menus are fixed and don't change. And you would be wise to reserve your table in advance via the Virgin app. Walk-ins are on a space available basis.

A few additional notes on food: All the menus place a emphasis on healthy choices. The pizza is excellent at The Pizza Place on Deck 7, and you can find something open, or room service, 24/7, which we liked. And don't miss the ice cream on Deck 7, provacatively named "Lick Me Till Ice Cream." So good.

Since the clientele is all-adult, the shows onboard tend to be racier and more edgy. There are a lot of areobatics involved as well. With the venues smaller, the shows, which you have to reserve via the app, fill up quickly. In fact, just about all of them were marked "sold out" for our cruise. It didn't matter so much to us -- they aren't our cup of tea for the most part -- but that must be disappointing for other guests who no doubt feel shorted.

A real highlight of our cruise was getting access to Richard's Rooftop, the retreat on Deck 16 reserved for rock star suite guests and VIPs (thank you, Virgin). Besides the hot tubs, lounging areas and bar, every day from 5:30-7 pm, it's "bubbly time" when you can enjoy unlimited Moet champagne (and you know how Pam loves her champagne). Service there, as you might expect, was outstanding. And not a bad place to watch the sunset. The only downside is they have located the designated smoking area right next door, which is annoying. 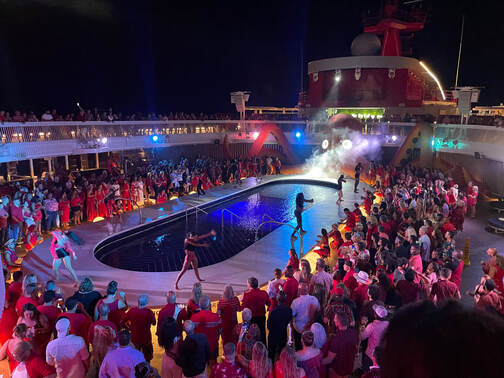 Scarlet Night is one big party ship-wide
​A highlight of every voyage is Scarlet Night. Guests are encouraged to wear red and join in the shipwide festivities, which include roving jugglers and dancers, red lighting and large, blow-up tentacles, all culminating in a dance party by the ship's pools beside a giant, inflatable octopus. Party-goers splash to the hits past midnight, when the festivities move indoors to The Manor club into the wee hours.

When guests aren't partying, there are plenty to places to exercise and work out, as well as a spa. Like Sir Richard, guests can party hard but focus on a healthy lifestyle at the same time.

One of the ports we were set to visit was Puerto Plata in the Dominican Republic, but Hurricane Fiona had other ideas. So we detoured to Costa Maya. But the best place we visited was Bimini, where Virgin maintains a private beach club. The water and beach there were spectacular, and we were able to enjoy it at the rock star retreat area, which made it that much better.

We had a Sea Terrace stateroom on Deck 12 with a private balcony, which included a red hammock in one corner that we both put to good use. The room features contemporary decor and a surprising amount of storage space. You can adjust the lighting, request room service or watch TV from a tablet. You don't get many channels, but it does feature a large library of movies. 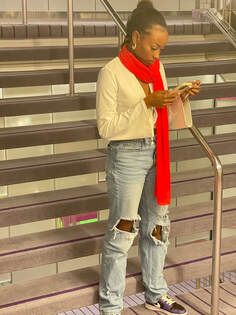 The mystery woman with a red scarf
​There are planned activities during the day to choose from, but the real watchword for this cruise is "relaxation" and doing your own thing. Scarlet Lady has a cruise director, but they are so laidback you probably won't notice.

Another thing of note -- we were having a drink in the Sip Lounge when the ship's magician sat down at our table and entertained us with some pretty amazing card tricks. Afterwards, he gave us a card and told us to be at a certain place at a specific time for “something special.” We were instructed to look for a woman wearing a red scarf and present the card to her.

At the appointed time, a group of us gathered and we followed the red-scarfed woman up and down staircases to a room in the crew area, where our phones were sealed up in pouches before we could enter.

The magician entered and proceeded to entertain us with some mind-blowing magic. Pretty cool. Another aspect of a Virgin cruise: Expect the unexpected.

No doubt a Virgin cruise isn’t for everybody -- few cruises are. But if you are looking for an edgier experience, crafted for an adult audience, Virgin may be just the ticket, as Sir Richard might say.