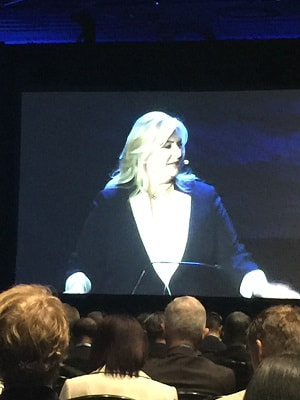 ​SEATRADE MIAMI_After moving to Ft. Lauderdale, SeaTrade Cruise Global 2019 once again returned to Miami following an extensive refurbishing of the Miami Beach Convention Center. Cruise industry exectives were joined by thousands of attendees and 700 exhibitors representing every facet of the cruise business. And business is booming.

Kelly Craighead, the president and CEO of the Cruise Lines Industry Association (CLIA), confirmed that in her opening remarks on Tuesday with these stats:

Ms. Craighead also spoke about the industry's commitment to protect the environment, including reducing carbon emissions 40 percent by 2030. The environment was among several themes taken up by the "State of the Industry" panel discussion that followed, moderated by Lucy Hockings of BBC World News. Panelists included Pierfrancesco Vago, MSC Cruises executive chairman, Richard Fain, chairman and CEO of Royal Caribbean, Arnold Donald, president and CEO of Carnival and Frank Del Rio, president and CEO of Norwegian.

Among the points they made:

⦁ Fain emphasized the need to always be looking forward, avoiding "one size fits all" and embracing diversity. "If people want it, we need to provide it."

⦁ Vago talked about the importance of making getting on and off ships a seamless experience and how technology can be used to help with all aspects of cruise travel.

⦁ Donald foresees growth in all sizes of ships over the next 10 years, although he pointed out there's a set amount of capacity with the current shipbuilders.

⦁ Del Rio noted additional cruise entrants lend more credibility to the industry, and was bullish on the re-emergence of Eastern Mediterranean ports of call.

Two major segments driving growth are the millennials and an increasing number of Baby Boomer retirees. One difference, according to Fain, is that the millennials "don't have the same preconceptions about cruising" as the Boomers.

Day one of the conference ended on a high note at the Royal Caribbean Reception, held at the National Hotel on Miami Beach. Food, fun, music and our good friends at Royal on a perfect Miami night -- what's not to like?

Over 700 Exhibitors From Every Segment of the Cruise Industry

Seabourn revealed the public spaces on their new ultra-luxury expedition ships, coming in 2021 and 2022 while
the audience enjoyed champagne and caviar. Read more about their announcement here.